Fatland is located both in Ølen, Sandnes, Oslo and Sandefjord.

The plant is also the largest private slaughterhouse in Norway. It is right in the middle of Jæren, Norway’s main meat region. Here we slaughter cattle, pig and sheep/lamb. There is also a modern deboning department mainly for cattle, but also sow and sheep/lamb when it’s the season.

The plant has been expanded many times in the later years in order to increase the production capacity.

Fatland Jæren gets slaughter from Grimstad in the south, Setesdal in the east, Randaberg in the west and Ryfylke in the north.

Fatland Ølen was built in 1974 and has since been expanded and modernized several times. After Fatland Bergen was shut down in the beginning of 2001, the quantity of slaughter in Ølen has increased, and the slaughterhouse now picks up slaughter from Hjelmeland in the south, Karmøy in the west, Telemark in the east and Sognefjorden in the north.

In the last years, the Fatland Ølen plant has been expanded with the building of a new Distribution Hub for the Group where we dispatch on daily basis products to 700 shops. The processing area has also been expanded and new machinery for production and packing acquired. 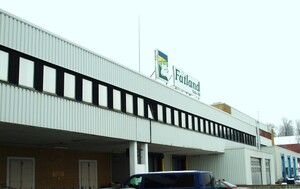 Our slaughterhouse in the eastern region of Norway.

Fatland Oslo slaughters and debones cattle, pig and sheep/lamb. The plant also sells meat from other private slaughterhouses in the region.

Fatland Oslo is the only slaughterhouse in the city of Oslo and the plant that increases most the number of pork killings per year in the Group. The plant was bought in 1983 from Oslo Kjøttsenter (Oslo Meat Center), which was the starting point for today’s plant in Furuset, Oslo.

Good meat products made of Norwegian and international traditional recipes’. The company supplies to consumers all over the country.

A modern meat industry company with competence and innovation spirit. These were the elements that made Fatland Group buy this plant in Sandefjord - in order to guarantee that meat from our producers would have access to meat counters throughout the country.

A fully modern production plant was built in 1985 next to the highway to Sandefjord in the Vestfold region. It was important to be close to the market as much as possible. Today the area is quite attractive since the nearby Torp International airport.

The plant’s main products are sausages and cooked hams which are sold by our sales company Skjeggerød AS with the SKJEGGERØD trademark and/or supermarket own brands.

Fatland Sandefjord has 130 staff members. It has supply agreements throughout the country with Norway’s two largest supermarket chains: NorgesGruppen (Spar, Meny, Kiwi, Ultra) and COOP-NKL (Prix, Mega, Obs!) and many other good clients. The company also sells to the HORECA sector.

Since 2002, the Sandefjord business has been divided into two companies:

Fatland Sandefjord AS is the industrial company with main production of sausages and cooked hams.

Skjeggerød AS is a joint sales company for the industrial companies in Fatland-Skjeggerød group. Under Skjeggerød AS we have a sales team of over 30 people attending shops all over the country.

Our processing facilities in Sandefjord

Fatland Ull AS receives wool from the whole country.

Fatland Gjestal Ull AS receives wool from the whole country. Our job is to receive, classify and sell the wool that is sent to our wool stations. Our three wool stations handle around 25% of the country’s total wool. After the wool is sorted and the farmer has been paid, the wool is sold to both Norwegian and foreign woolen goods factories.

Fatland Gjestal Ull AS was established in 1993, after the monopoly on wool was repealed. This is a company owned by Fatland AS and ASA Gjestal Spinneri, each with 46,4 %, and three minor owners.

Fatland Hud & Skinn AS  processes and sells Norwegian hides and furs on the national and international market.

After delivering their hides and furs to established wholesalers for many years, and since it was quite a big private business, Fatland decided to establish its own wholesale business in 1991. After more than 15 years in business it has proven to be the right choice.

The company has built up a good reputation on an international competitive market and the company’s goals and guidelines are quality and being able to deliver.

The company has production facilities and warehouses in Fatland Jæren AS and Fatland Ølen AS.

Miljøfôr Vest AS produces animal feed (wet feed for pigs) and delivers to clients from Bergen in the north and Jæren in the south. The company has one production unit on Karmøy (West-coast of Norway) and a raw material department in Bergen.

Animal feed is good pig feed in terms of cost-benefit.

Contact can also be made through Fatland’s slaughterhouses and advisory service.